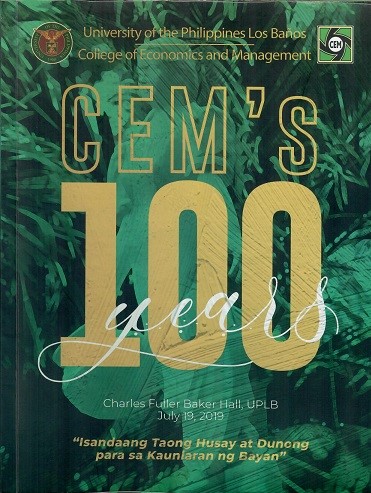 The University of the Philippines Los Baños College of Economics and Management demonstrated the breadth and depth of its influence as it recognized 100 graduates as Outstanding Alumni at the CEM Centennial Program and Grand Alumni Homecoming held on 19 July 2019. The decision to recognize 100 alumni was made to match the 100 years of existence of the college. The 100 personalities were selected based on the impact they created in their professional careers. College dean and awardee Isabelita Pabuayon welcomed the awardees in the ceremonies held  at Baker Hall, UP Los Banos.
Leading the select group was Dr. Arsenio Balisacan, chairperson of the Philippine Competition Commission, and former director-general of the National Economic Development Authority, who served as the keynote speaker of the homecoming. Dr. Cielito Habito, also a former NEDA director-general, Dr. Emerlinda Roman, former UP president, and UP regent Francis Laurel, were among the awardees who were from Luzon and the Tagalog region. A number practiced their professions in other location in the Philippines and in foreign countries.
Alumni with origins from Mindanao were also among the awardees. Philippine senator Juan Miguel Zubiri, four-term Davao City congressman Isidro Ungab, former National Power Corporation president Guido Alfredo Delgado, Central Mindanao University president Maria Luisa Soliven,  Asian Institute of Management dean Felipe Calderon, and UP Mindanao chancellor Larry Digal were among those who belonged to this group.
Chancellor Digal, a professor of agricultural economics in the UP Mindanao School of Management, was appointed fifth chancellor of UP Mindanao for the term 1 March 2019 to 28 February 2022. The term of Chancellor Digal promises fresh growth for UP Mindanao because he has stated that UP Mindanao's academic and operational expansion as his priority, in order to meet the challenges of development in Mindanao.
The academic expansion includes new undergraduate, graduate, and doctoral programs, while the operational expansion includes additional manpower and infrastructure. Degree programs in sports science are being adopted from other UP constituent universities to provide the human infrastructure to the DC-UP Sports Complex and contribute to improvement of the performance of Mindanao athletes.
More academic programs are being crafted or adopted from other UP CUs in agricultural biosystems engineering, environmental science, applied biology, data science, and applied modelling, among others. With the help of UP Manila, a degree program in medicine and medical research will be instituted to complement the sports program.
These programs require additional faculty, staff, and infrastructure.
Chancellor Digal has harnessed the help of the alumni, who are among the influential drivers for this growth and the sector which was most instrumental in the establishment of UP Mindanao. The alumni organizations have responded with a pledge to organize a Regional Alumni Institute in November. The UP Mindanao Foundation and the UP Alumni Associations in Mindanao are contributing the weight of their network and influence to bring alumni, legislators, cabinet secretaries, and the chief executive together in thids Institute to fast-track this expansion program for development in Mindanao. This strategy is being carried out with the help of some CEM alumni in Mindanao, particularly, Congressman Ungab and Senator Zubiri.
Through these efforts of Chancellor Digal and fellow CEM alumni in the region, the UPLB College of Economics and Management, from its base in Los Baños, Laguna in northen Philippines has proven that its influence extends and can be credited for contributing to development in Mindanao, southern Philippines.