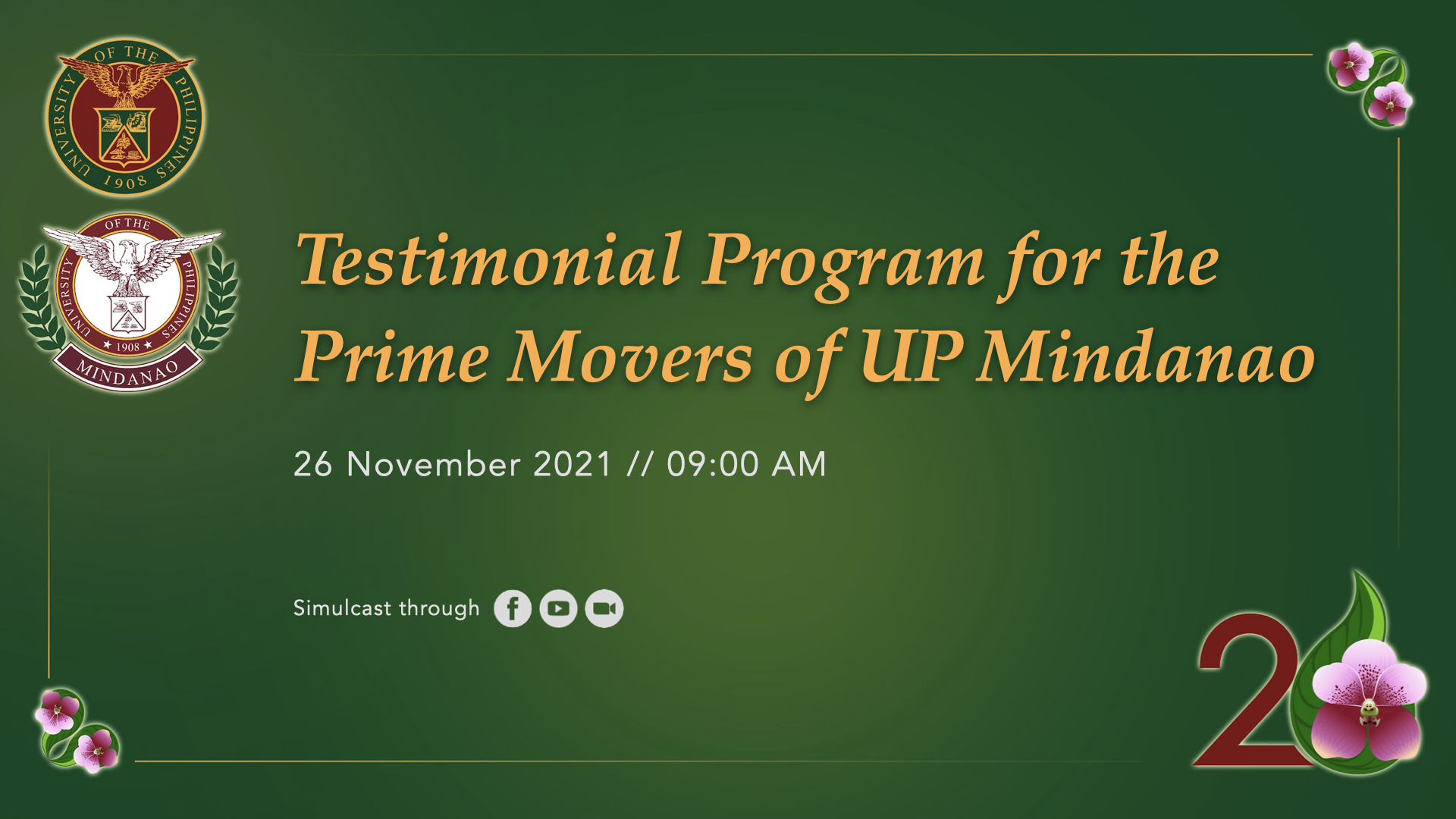 The University of the Philippines (UP) Mindanao holds its "Testimonial Program for the Prime Movers of UP Mindanao" online on November 26, 2021, to recognize and give thanks to 25 visionaries, prime movers, and pioneers whose efforts contributed to laying the foundation and the subsequent growth of UP Mindanao.
The testimonies of the individuals, groups, and organizations aim to recall and immortalize the history of UP Mindanao and build on their earlier efforts for UP Mindanao's advancement in the coming years.  A highlight of the event is the three-part video documentary series produced by BACMA Sibya Media Production Group. UP President Danilo L. Concepcion will give a message, completing this 25th Anniversary celebration which was started in 2020.
UP Mindanao was created through Republic Act 7889 and the honorees for this action are Hon. Fidel V. Ramos, former President of the Republic who signed Republic Act 7889 into law; Hon. Eduardo J. Angara (+), former UP President, Senate President, and co-author of the Senate bill for UP Mindanao; Hon. Elias B. Lopez (+), "founding father" of UP Mindanao, proponent of House Bill (HB) 13382 in 1995, the Lopez bill for UP Mindanao; Hon. Prospero C. Nograles (+), proponent of HB 30358 on April 30, 1990, the first UP Mindanao bill; Hon. Rodrigo R. Duterte, then-incumbent Davao City Mayor when RA 7889 was signed.
The efforts to create a UP Mindanao were sustained by local alumni over two decades, with the UP Alumni Association–Davao (UPAAD), UP Los Baños Alumni Association-Davao (UPLBAAD), and, subsequently, the UP Mindanao Foundation, Inc. (UPMFI) leading the efforts. To be honored this year are Mr. Sebastian L. Angliongto, UPAAD Chapter President from 1988 up to the approval of RA 7889, Mr. John Y. Gaisano, Jr., an active participant who communicated with national leaders to support UP Mindanao, and Mr. Luciano "Sonny" L. Puyod II (+), also an active participant in the planning for the creation of UP Mindanao and support in early years.
The UP officials to be honored are: Prof. Emil Q. Javier, the incumbent UP President when RA 7889 was passed in 1995; Dr. Fortunato de la Peña, former UP Vice-President for Planning and Development who led committees in planning for UP Mindanao; Prof. Rogelio V. Cuyno, first Dean (1995) and elevated as 1st Chancellor of UP Mindanao (1998) who established the three colleges; Prof. Ricardo M. Ungria, first Dean of College of Humanities and Social Sciences (CHSS) and 2nd Chancellor (2001), and convenor of the Davao Colleges and Universities Network and the Mindanao S&T Park Consortium; Prof. Gilda C. Rivero, 3rd Chancellor (2007), who effected the rapid improvement in road systems, infrastructures, and earned a CHED Center for Development for UP Mindanao; and Prof. Sylvia B. Concepcion, 4th Chancellor (2013), who managed expansion and infrastructure developments.
Former Deans, Directors, and other notable individuals to be honored are Prof. Leonardo A. Chua (+), Associate Dean and 1st Vice-Chancellor for Academic Affairs; Prof. Eufemio T. Rasco, Jr., former Dean of College of Science and Mathematics (CSM) and first Professor Emeritus; Prof. Teresita V. Guillen, former CHSS Dean; Prof. Dulce M. Flores (+), pioneering faculty member and sago researcher and OIC-Dean of the former College of Arts and Sciences and Economics; Prof. Fedeserio C. Camarao, former Director of Community Service and Public Affairs; Prof. Niceto S. Poblador, former School of Management Dean; and Prof. Nelson G. Natural, former lead in the social preparations for settler communities in the campus and the Land Reservations.
Hon. Cong. Isidro T. Ungab will be honored for infrastructure development in recent years, the road networks, and the Davao City-UP Sports Complex.
Finally, 5th UP Mindanao Chancellor, Prof. Larry N. Digal, will deliver remarks on behalf of UP Mindanao to the honorees.