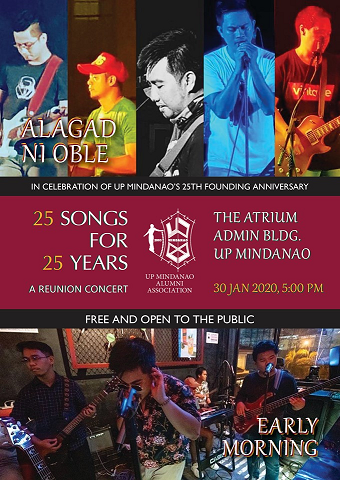 "Alagad in Oble" rock band will hold a reunion concert on 30 January 2020 as an offering for the 25th anniversary of University of the Philippines (UP) Mindanao.   The concert entitled "25 Songs for 25 Years" will be held at the Administration Building, UP Mindanao, Mintal, Davao City. The public is invited and admission is free of charge.
Alagad ni Oble is composed of UP Mindanao alumni Roosevelt Itum (BS Biology), Ian Cayunda (BS Biology), Arthur Gonzales (BA Economics), Milos Dagohoy (BS Food Technology), and Wardy Puyod (BA Social Science). The band was conceived during the members' student days in UP Mindanao and has continued to exist and perform seasonally alongside the professional growth of the band members. The band has also recorded a rock version of the "UP Naming Mahal" which is among its widely heard songs.

The anniversary kick-off is on 20 February 2020 with a motorcade in downtown Davao City to the campus in Mintal, Davao City. Celebrations will be held in the Administration Building throughout the day until evening.