The anniversary of the signing of Proclamation No. 1081 by Ferdinand Marcos, placing the Philippines under Martial Law, is coming up on September 21. And yet, 49 years later, we continue to deal with lies, misinformation and historical revisionism of Martial Law and the Marcos regime on various media platforms.

This coming week, scholars of history and the social sciences from the University of the Philippines (UP) and other universities here and abroad will team up with human rights activists to set the record straight regarding the myths of Martial Law and the Marcos regime through the UP Days of Remembrance. This is the University’s week-long virtual commemoration that aims to honor the struggle of the Filipino people under the authoritarian regime and UP’s contribution to the uprising against the Marcos dictatorship. It will be held from September 20 to 24, 2021, from 9:00 a.m. to 12:00 noon.

With the theme, “Dambana ng Gunita: Mga Batayang Katotohanan at Aral ng Batas Militar”, the commemoration will go in depth on the specific issues that often fall prey to misinformation, such as: Marcos’s alleged heroism; the supposed peaceful society during the Martial Law years; the truth with regard to human rights violations under the Marcos regime; the myth of an economic golden age under the Marcoses; and, the rampant corruption and cronyism of the Marcos administration that set our country back decades. This will be done through educational discussions and conversations on what really happened during the dark years of the Marcos regime.

The program for the week-long virtual webinars is as follows: 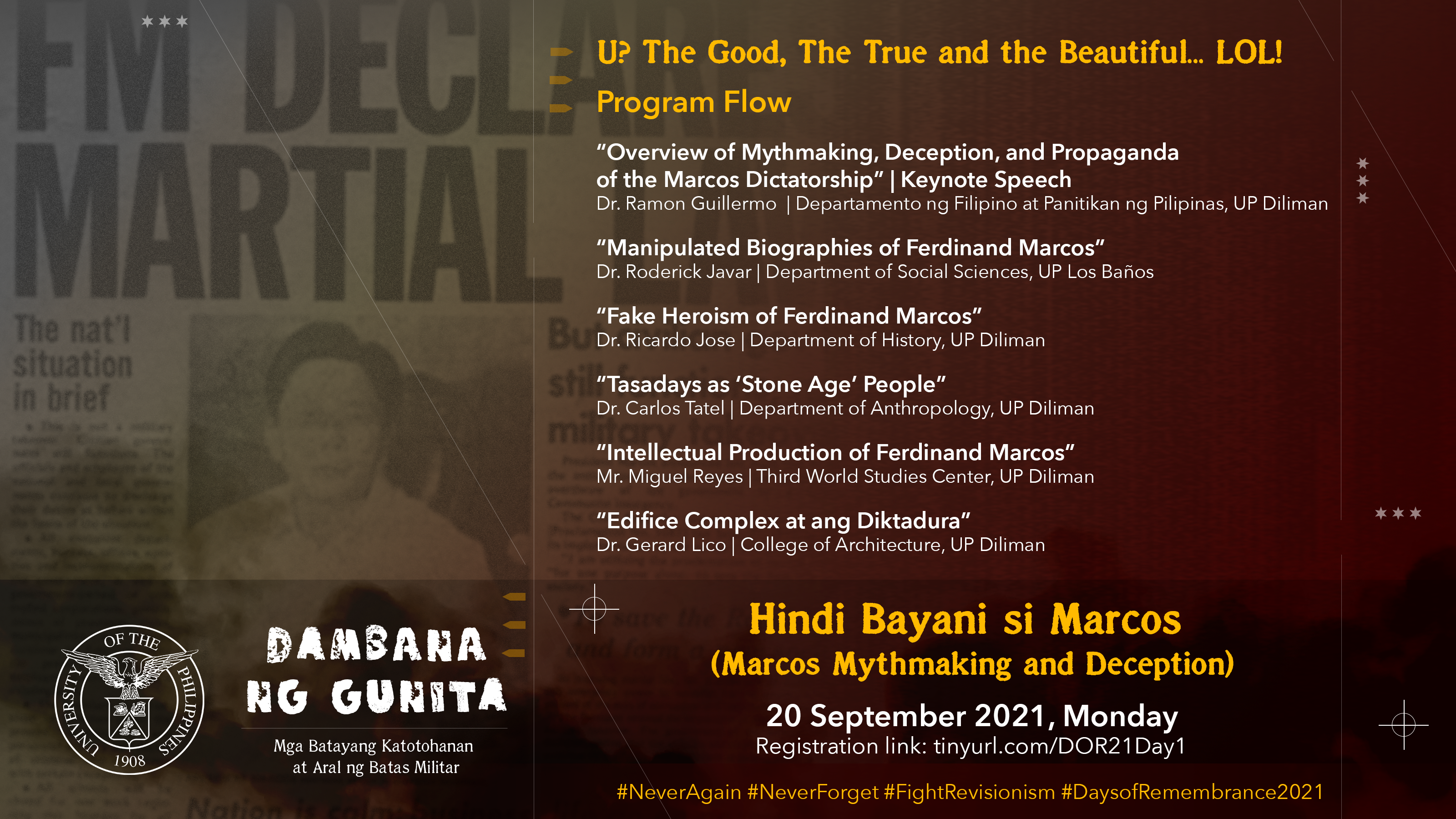 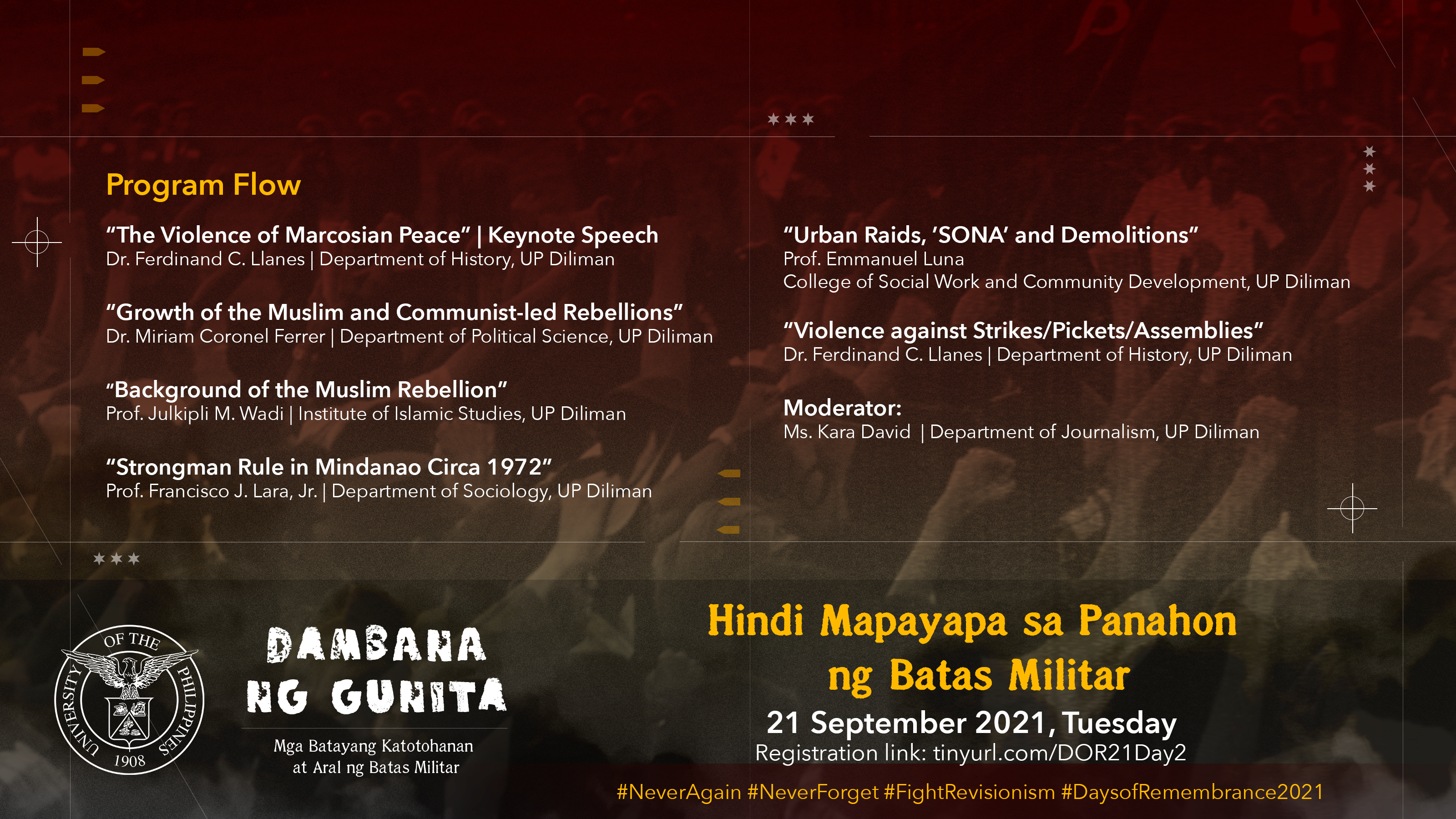 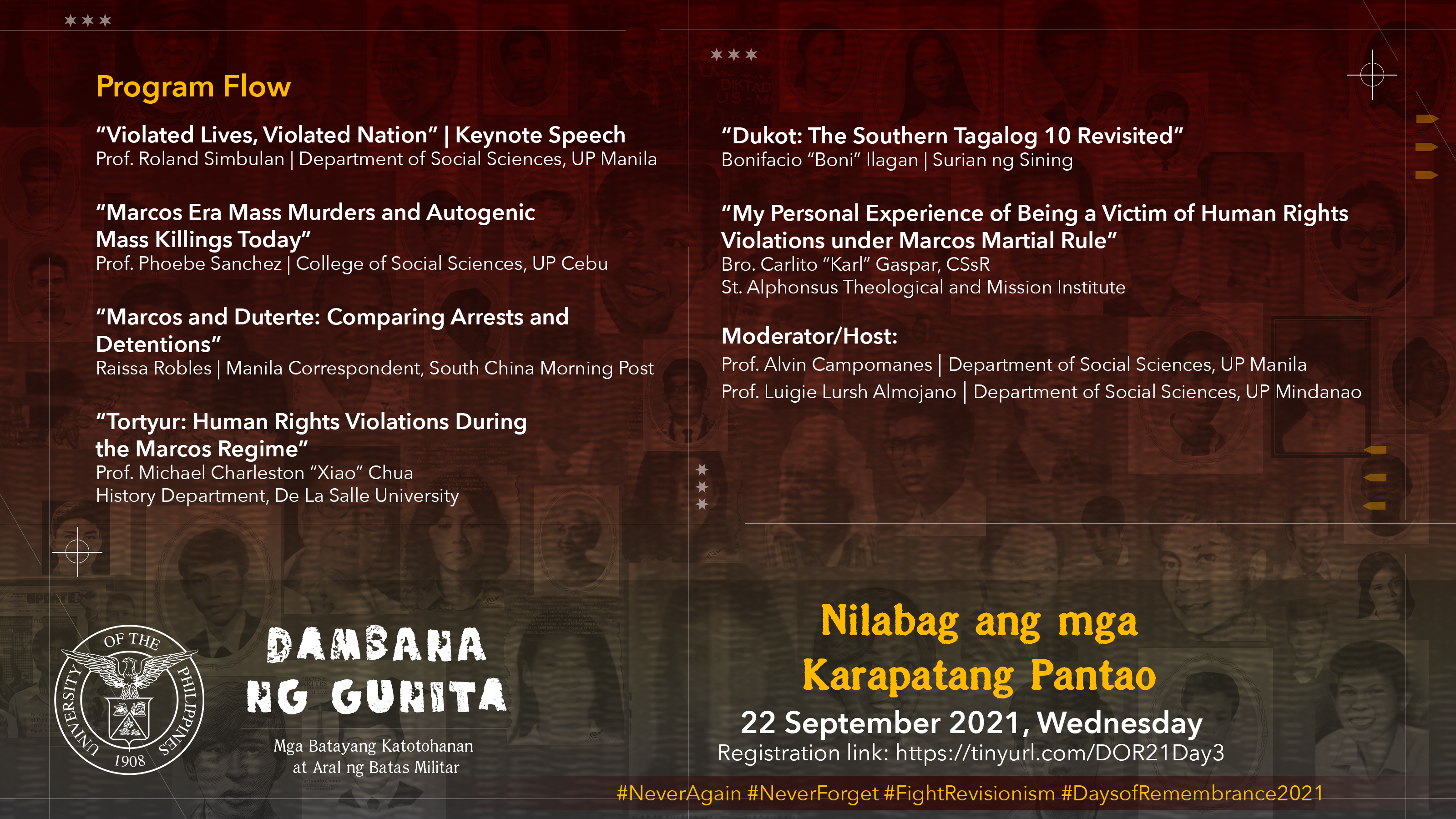 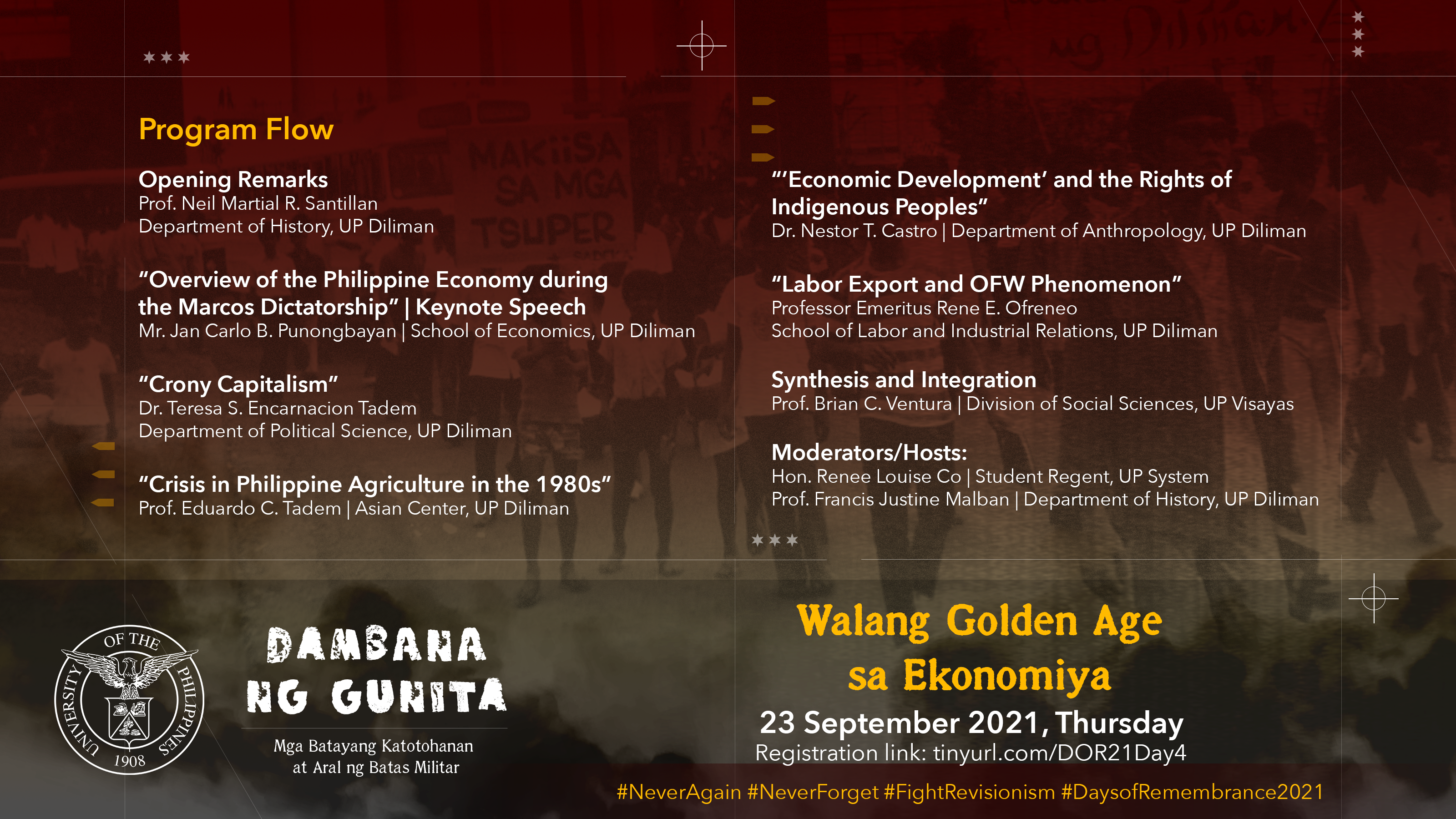 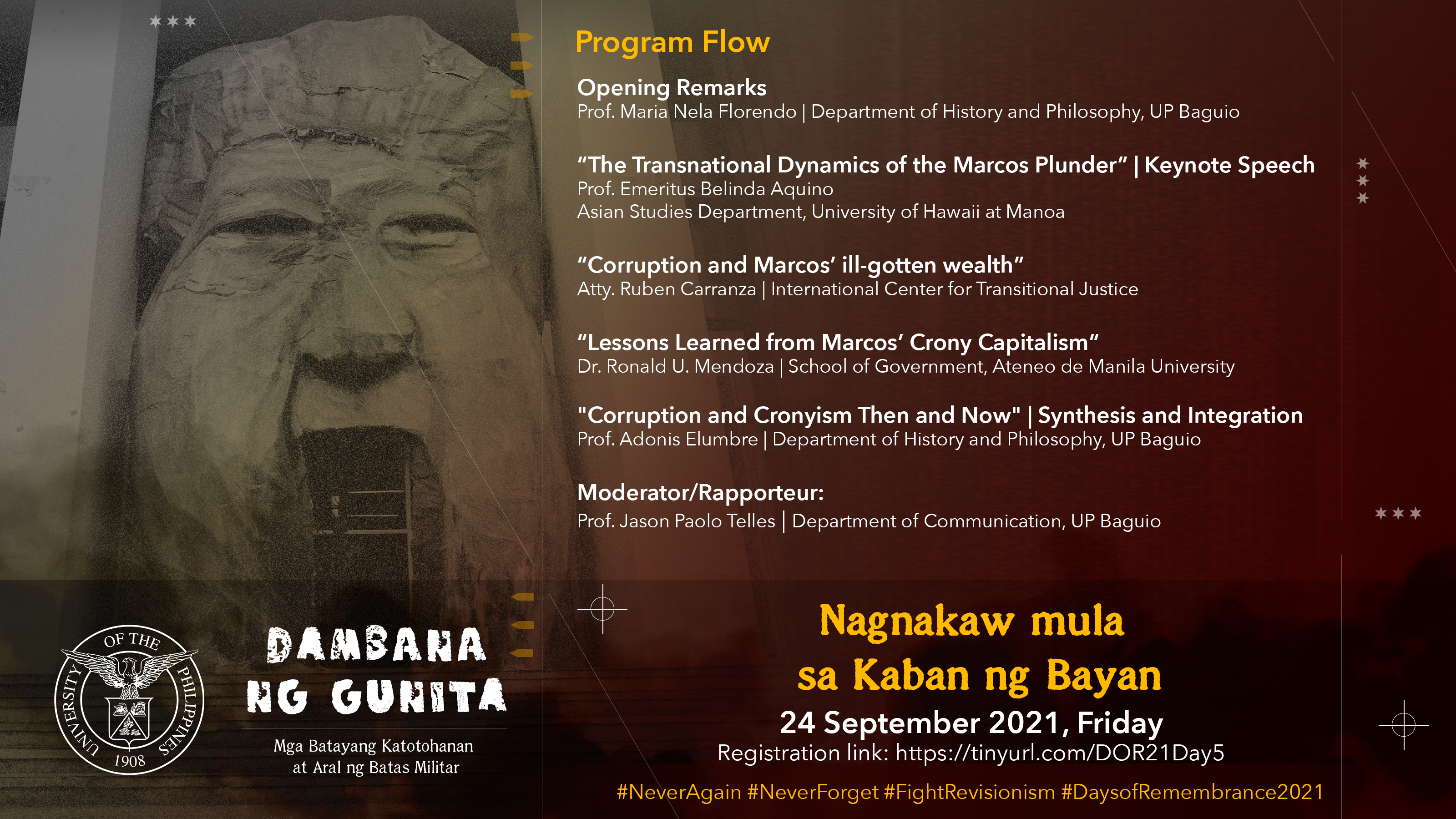 The UP Day of Remembrance is an annual event that aims to enshrine the names and struggles of the University’s best and brightest who fought, struggled and made the greatest sacrifices in the name of freedom and democratic ideals. In 2018, UP President Danilo L. Concepcion signed Proclamation No. 1 in 2018 declaring September 21 of every year as UP Day of Remembrance, during which special lectures, meetings and ceremonies were to be held across the UP System to commemorate UP’s contribution in the nation’s struggle against dictatorship and tyranny.

The UP Days of Remembrance is open to all students, teachers, educators, historians, scholars, and all citizens who wish to continue learning about our country’s history and who believe in the importance of upholding and defending basic freedoms, civil liberties and human rights. Livestream of the webinars and the online exhibit will be available via TVUP.ph and TVUP’s YouTube channel.

For more information about the past UP Days of Remembrance, visit this link: https://up.edu.ph/days-of-remembrance/