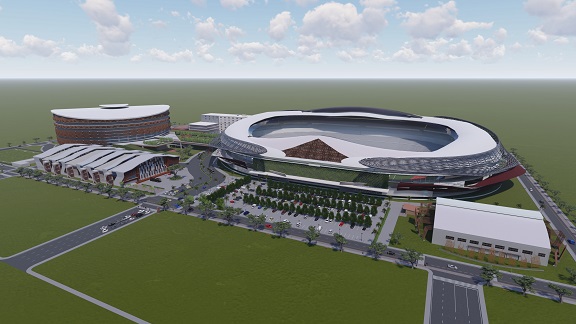 The newspaper Edge Davao recently published an article entitled “Field of failure?” about the track oval in the Davao City−UP Sports Complex in its 24 November 2019 issue. As the university has not been contacted for comment on the issues raised in the article, the University of the Philippines (UP) Mindanao wishes to present information that will be valuable for the public to make an informed assessment of the situation at hand.

The entire Sports Complex is a collaborative effort between the City Government of Davao and the University of the Philippines, in consultation with the Philippine Sports Commission (PSC). The creation of the facility is in line with the City Government of Davao’s vision to make “Davao City a regional hub for sports in Mindanao and Asia” and UP’s mandate as the national university to “undertake and support comprehensive sports programs that promote physical education, uphold excellence and encourage competitive participation in sports activities, instill school identity and solidarity, cultivate pride, self-discipline and teamwork which serve as a foundation for fostering active participation in the national university, as well as in nation building.” The Davao City−UP Sports Complex is jointly managed by the City Government and UP Mindanao.

Throughout the process of developing the Sports Complex, the PSC has always been engaged considering that the construction of the facility aligns with their vision to create “a sporting culture that nurtures healthy, disciplined and peaceful citizens setting the Filipino athlete at par with the world’s best” and their programs to “make sports accessible” and “erect new sports facilities at par with global standards.” For the track oval, PSC engineers and architects have regularly inspected and monitored the project.

The university would like to assure the public that the contractor of the civil works for the oval has indeed complied with the specifications of the International Association of Athletics Federation (IAAF) as published in the IAAF Track and Field Manual 2008 edition and that the installer of the synthetic track is certified as a service provider by the IAAF. Every phase in the site preparation and actual installation of the track oval has been subjected to rigorous measurements in line with the said standards. Regarding the observed slope in the track oval, the manual actually allows for this, stating:

For the competition area for Track Events the following maximum gradients shall apply:

-   0.1% downward in the direction of running. Should the gradient of the sprint track as part of a Standard Track vary, the inclination is measured in a straight line between start and finish line for each event.

The creation of a “double bend” track oval is permissible based on IAAF rules. To quote from the manual: “It is normal for an athletics track to be used for other sports. Generally, this involves using the interior of the 400m tracks as a pitch for soccer, American football or rugby. Obstacle-free sports areas in the segments at the same level as the playing field without kerbs over which sportsmen could stumble can be included in the safety zones.” The manual then provides specifications for “double bend” ovals, and the one in the Sports Complex has complied with these specifications as evidenced by the plans available at the university’s Campus Planning and Development Office.

The decision to integrate the football field with the track oval was done for practical reasons to address limited space and budget. It would have been more costly to have two separate stadiums for football and track and field. Moreover, the use of artificial turf for the football field was done because natural grass will require 10,000 L of water twice a day to maintain, which is counter to the green initiatives promoted by the university. But because of this decision, throwing events cannot be held within the stadium as the impact of objects hitting the artificial turf will damage it considerably; hence, a throwing and archery field is being constructed adjacent to the stadium. Jumping events may also be integrated outside the track oval at a later date, but the university currently does not have the budget to develop the area allotted for these events.

During the Palarong Pambansa last April 2019, the open area for jumping and throwing found adjacent to the stadium was not yet finished; hence, the organizers decided to hold archery matches there instead and hold all football matches in the football field. The track and field events were transferred to the University of Mindanao facility in order to have all related events such as running, throwing, and jumping in one venue.

For the Davao City Athletics Association (DCAA) meet, the Department of Education was made aware of the as yet non-existent facility for jumping and throwing but still decided to have these events in the Sports Complex, necessitating the creation of a makeshift long jump venue outside the oval. In fact, the DepEd tournament manager for athletics signed an agreement stating that they will take charge of “[p]reparing, maintaining, and clearing all areas to be used for all track and field games.”

The university would like to report that the oval was just completed last 13 March 2019, and the adjacent throwing field is ongoing construction (i.e., civil works is not yet completed and additional budget is required for the installation of game surfaces). Given that IAAF certification is for track and field, all facilities for running, jumping, and throwing must be completed and submitted for evaluation together, not separately. Hence, UP Mindanao has not yet submitted the facility for IAAF certification pending the completion of the spaces for throwing and jumping events. Furthermore, the IAAF certification requires a fee of considerable amount (approximately P1.5 million), and the university does not have yet the financial resources to do this.

The university would also like to correct the claim that the track oval costs P450 million. The cost for civil works (approximated based on the area as this process was done for both the football field and track oval) and the laying of synthetic track amounts to about P55.5 million, which is funded by UP. Other facilities in the Sports Complex, such as the stadium enclosing the track oval and football field, is implemented by the Department of Public Works and Highways−Region XI.

At the time of this writing, the football field and the track oval funded by UP as well as the training gym, phases 1 and 2 of the stadium, water system network, and road networks implemented by the DPWH XI have been completed. Ongoing construction are the aquatics center for swimming events and phase 3 of the stadium. The Sports Complex will require additional resources for phase 4 of the stadium, the arena for indoor sports like basketball and volleyball, and the floating plaza that will connect the stadium and the arena. There are also plans to build an athlete’s village, a hotel, and an overland transport terminal as additional amenities for the facility.

The University of the Philippines is one with the City Government of Davao and the Philippine Sports Commission in making Davao City a mecca for sports in Mindanao and promoting sports as a means to contribute towards human development and the enhancement of the social fabric.

The university remains open for any request for information regarding facilities being constructed within its campus. For further details and queries, interested parties may contact Prof. Erwin Protacio, the chair of the Department of Human Kinetics, through his mobile number at 09174345114.

As the sixth constituent university of the University of the Philippines, UP Mindanao continues the tradition of excellence in providing higher quality education, research and development, and public service for the people of Mindanao.