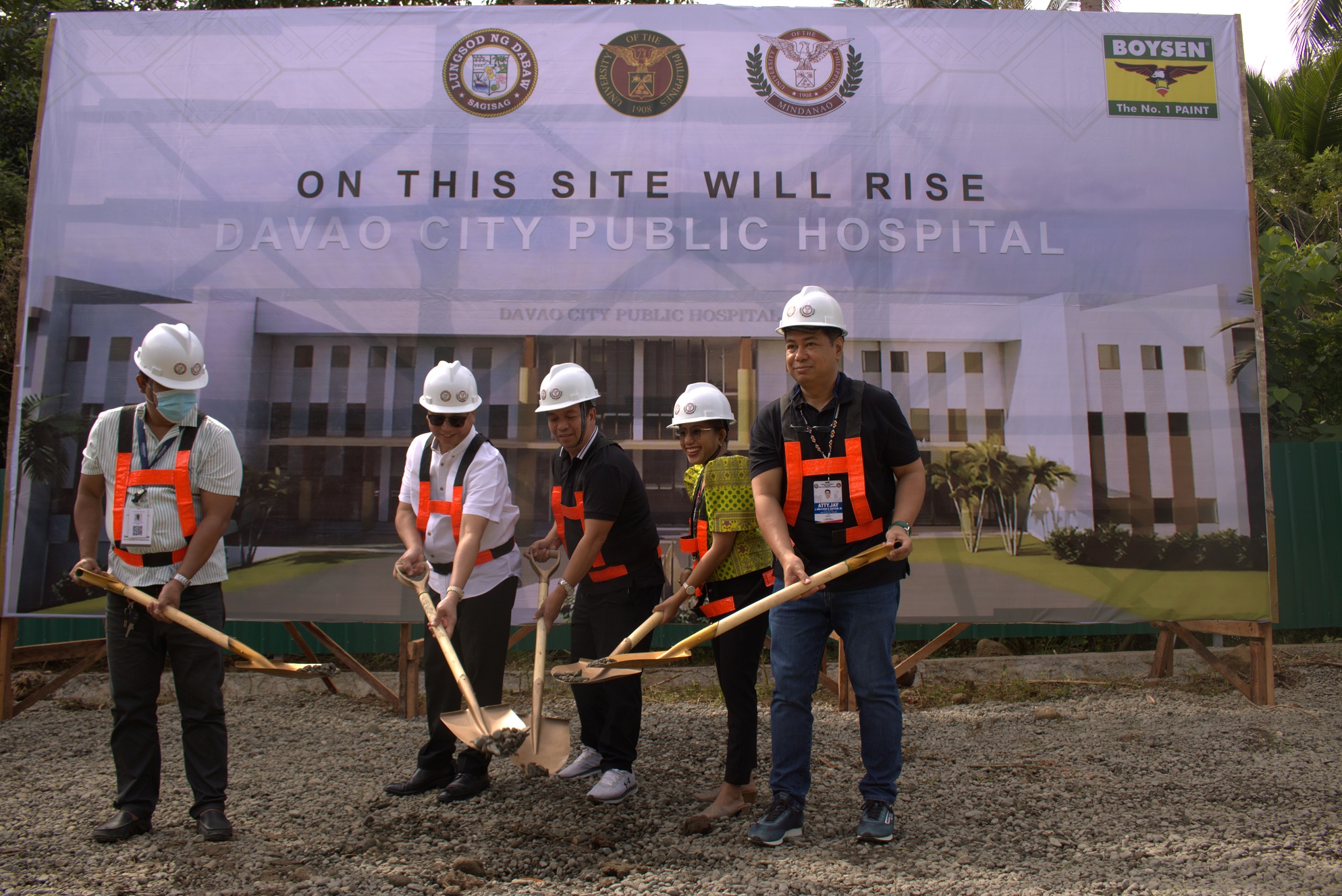 University President Danilo Concepcion called Davao City’s investment in public health the best investment that the city can make for its constituents. He said this in remarks made after the Groundbreaking Ceremonies for the Davao City Public Hospital, held on December 20, 2022, at the UP Mindanao campus. The Public Hospital, he said, will serve as a training hospital for the future UP Mindanao College of Medicine, which will specialize in sports medicine while bringing the quality medical instruction and clinical research of UP Manila and the Philippine General Hospital to the southern Philippines. He thanked the City for sharing UP’s vision for UP Mindanao as a regional and national center for athletics, human kinetics, sports science, and sports medicine. The vision, he said, began with the Davao City–UP Sports Complex, followed by the soon-to-be-realized UP Mindanao College of Human Kinetics and College of Medicine. 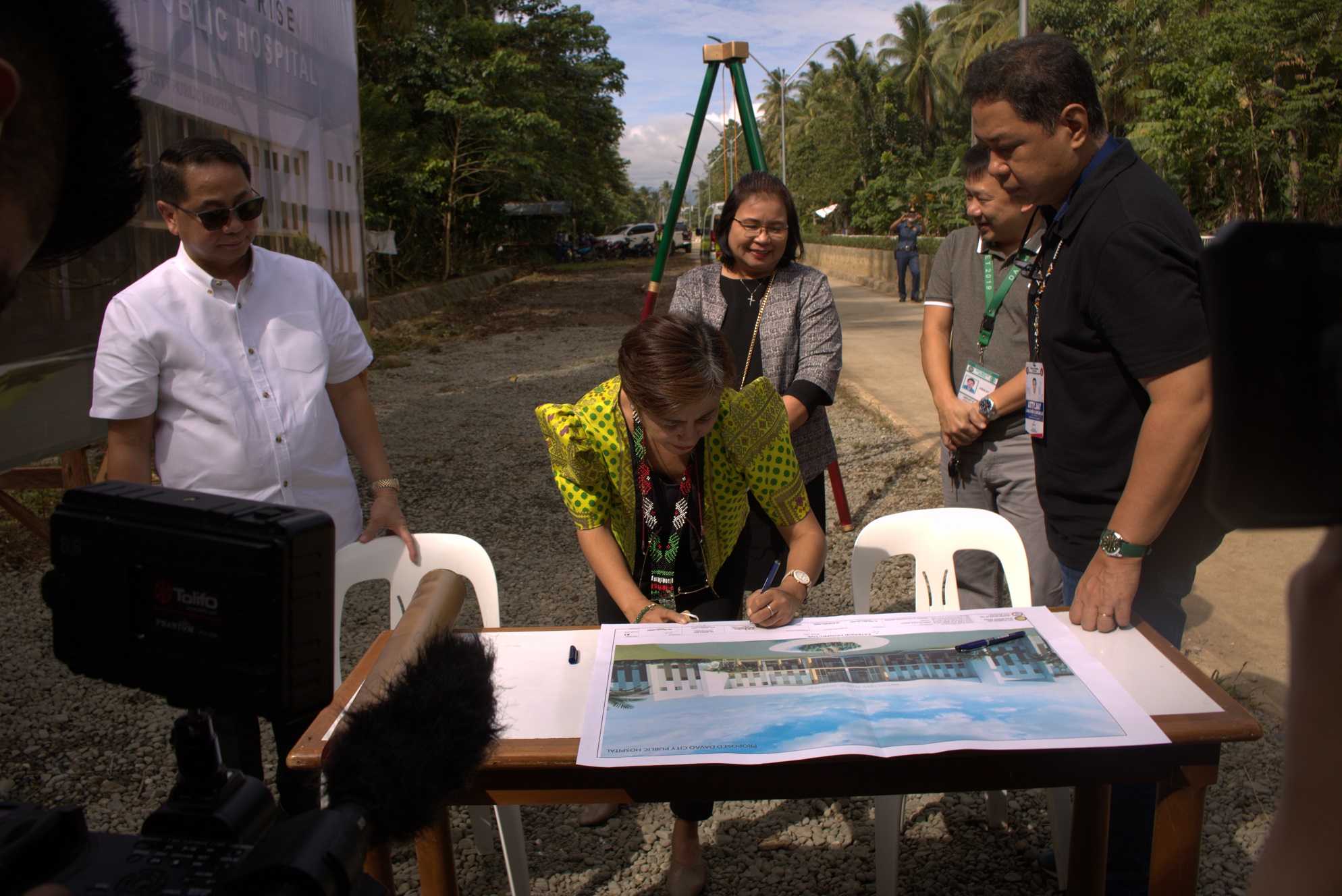 “Thank you for believing in the dream and recognizing the necessity of building up Davao City’s healthcare system, which, like the rest of our country's healthcare system, is facing significant challenges,” he said. “In my estimation, construction can begin in the middle of next year, and in less than two years, we can see the hospital almost completed. And in the second year, maybe we can open the college of medicine; that’s my estimate,” he said. “Although my term ends very soon, I will update myself on developments here, and I will come and visit when the hospital is constructed,” he said.
City Vice-Mayor Atty. Jay Melchor Quitain, representing Mayor Sebastian Duterte, expressed his gladness over the public hospital groundbreaking to cap the numerous city developments in 2022.
“Just when we thought Davao City had its fill of projects for the year,” said, citing the completion of the City Health Building, the City Coastal Road, the inauguration of the Davao-Samal Bridge, and the upcoming Tamugan Water Supply and the National Museum branch in Davao City, “now we have the groundbreaking of the Davao City Public Hospital,” he said.
The DCPH will provide health care and medical intervention for Dabawenyos and hopefully decongest Southern Philippines Medical Center, the lone public hospital in the city. The DCPH operations will be under the City Government for 25 years, after which it will be turned over to UP. According to the Davao City Public Hospital Ordinance passed on May 4 this year, the DCPH is envisioned to be a 100-bed Level III Training Hospital that will provide services for all kinds of medical care. The services stipulated are consulting specialists in Medicine, Pediatrics, Obstetrics-Gynecology (Ob-Gyne), and Surgery. In addition, it will have Emergency and Out-patient Services with a Respiratory Unit, Physical Medicine and Rehabilitation Unit. The ordinance also mentions Isolation facilities, a General Intensive Care Unit, Surgical/Maternity facilities, a High-risk Pregnancy Unit, Ambulatory Surgical Clinic, a Dental Clinic, Neonatal Intensive Care Unit, and a Dialysis Clinic.
Attendees of the groundbreaking ceremony were City Vice Mayor J. Melchor Quitain, UP President Danilo Concepcion, UPMin Chancellor Lyre Anni Murao, UP VP for Public Affairs Elena Pernia, and other Davao City officials.
In the top photo are (left-right): UPMin Vice-Chancellor for Administration Leo Manuel Estana, UP President Danilo Concepcion, City Health official Dr. Evelino Buenaventura, UPMin Chancellor Lyre Murao, and Davao City Vice-Mayor Jay Melchor Quitain.
In the lower photo, in the plans-signing ceremony, are Pres. Concepcion, Chancellor Murao, former city councilor Dr. Joselle Villafuerte, Dr. Evelino Buenaventura, and Vice-Mayor Quitain