Assistant professor of humanities and artist Teody Boylie “Bong” Perez was one of two Filipinos who were invited to exhibit a painting at the 8th Beijing International Art Biennale at the National Art Museum of China, People’s Republic of China, from 30 August to 20 September 2019. The painting entitled “Contrast of Life, 2018,” oil on canvas piece, was one of 446 paintings and sculptures by foreign artists selected from 125 countries and 194 works by Chinese artists exhibited at the Biennale with the theme “A colorful world and a shared future.”

On 4 September, the Philippine Genome Center Mindanao Satellite Facility organized the Pep Talk on Medical Genetics for students of the College of Science. Dr. Bryan Edgar K. Guevara of Southern Philippines Medical Center gave a talk titled "Hello, Love, Goodbye: Life of a Filipino dermatologist/researcher abroad" and Dr. Chao Kai Hsu of National Cheng Kung University, Taiwan spoke on "How do genetic studies help patients with genodermatoses." The team arrived with students from Cheng Kung University and were met by Officer-in-charge Nilo Oponda and VP for Development Elvira Zamora, who was in the campus for a meeting.

On 5 September, the Philippine Genome Center-Mindanao Satellite Facility convened the nascent Mindanao Genomics Consortium in UP Mindanao. Some 45 officials from 33 academic, industry, civic society, and government organizations attended, including heads of three Mindanao higher educational institutions and Davao City councilor Pilar Braga. UP Mindanao chancellor Larry Digal welcomed the representatives while Department of Science and Technology-XI assistant regional director Elsie Solidum gave the overview. PGC-MSF director Lyre Anni Murao discussed the functions of the facility. The consortium, conceived to be a special group of the Department of Science and Technology, aims to gather science and technology stakeholders in Mindanao to facilitate genomics research work and research collaborations. At the end of the day the assembly unanimously expressed their willingness to be part of the consortium.

On 9 September, the Center for the Advancement of Research, development, and engagement In Mindanao (CARIM) organized the University Extension Planning. CARIM director and professor Emma Ruth Bayogan gave the rationale to the 30-plus researchers and staff who attended. UP Diliman Office of Extension Coordination director and associate professor Lenore P. de la Cruz gave a presentation on extension implementation in UP Diliman for reference of the participants. Discussions and presentations of extension plans were produced in the breakout sessions which were reviewed by the assembly and the resource person. A synthesis and a presentation of the way forward in extension culminated the day-long session.

On 10-11 September the team went to Metro Manila and met Commission on Higher Education chairperson J. Prospero de Vera, Department of Budget and Management acting secretary Wendel Avisado, and Cabinet Secretary Karlo Alexei Nograles. On 14 September, a UP Mindanao delegation of 27 staffmembers led by human resource chief and assistant professor Jackie Lou Tagubase participated in the "Zumba for a Cause" in SM City Davao in celebration of the 119th Philippine Civil Service Anniversary.

On 16 September, UPMFI president Atty. Marie Dinah Tolentino-Fuentes anf UP Mindanao public relations officer Rene Estremera were guests in the Kapihan sa SM press conference in SM City Davao to promote the coming Regional Aluni Institute in 22-23 November 2019. News reports were seen in Mindanao Times and The Edge newspapers and websites of the Philippine Information Agency and the Malaysian Sun.

On 18 September, a ribbon-cutting ceremony was held to open the UP Mindanao technology business incubation unit named "UP Growing And Developing Enterprises" or UPGrADE. "UPGrADE aims to promote entrepreneurship through innovation as a viable career path for Filipinos," said assistant professor and UPGrADE manager Miguel Carlo Guillermo. The Department of Science and Technology, which is funding the operations of UPGrADE under the DOST-Higher Education Institution Readiness for Innovation and Techno-preneurship (HEIRIT) program, was represented in the opening by DOST-XI regional director Anthony Sales, DOST-PCIEERD deputy director Raul Sabularse, and DOST Research Information and Technology Transfer Division chief Russell Pili. Chancellor Digal, in his remarks, thanked DOST for granting UP Mindanao the new opportunity to create enterprises from the products of research in addition to the support for the ongoing lactic acid purification project and the proposed science and technology park.

On the week of 21 September, UP Mindanao observed the UP Day of Remembrance to honor the resistance against the martial law in the Philippines in the 1970s.  "Imong Papa Move On: Forum on Martial Law" was held on 19 September with speakers JV Cabajes and novelist and former political detainee Ms. Lualhati Abreu. At 6:00 PM, a candle-lighting ceremony and lightning rally was held in conjunction with the annual student Torch Night. On 20 September, a protest march was held around the campus culminating in a rally at the Atrium steps.

On 22 September, BS Computer Science teams finished in first and third place in the Startup Weekend Davao Women competition for information technology solutions to problems in the cacao industry. Team 10Kers, the first-placer, conceptualized a mobile phone application for monitoring cacao farms that uses a combination of hardware and software development with the application of Internet of Things (IoT). The third-placers, Team CacaoJuan, created an offline data monitoring system for cacao growers. The competition was a culmination of three days of idea creation and development over 20-22 September 2019 in Kadena Hub, Davao City, co-organized by University of the Philippines Mindanao UPGRADE and other technology business incubation units and industry partners Techstar Startup Weekend and Ambidextr.

On 23-24 September, the Executive Committee went on a tour of Compostela Valley province to meet partners and prospective collaborators. The Laak Multi-Purpose Cooperative was the first stop wherein Chancellor Larry Digal proposed a collaboration for a cacao project. In the afternoon, the team met Provincial Governor Jayvee Tyron Uy who received a briefing on the university's land reservation and other prospective engagements in the province. On 24 September the team visited part of the Laak land reservation and viewed the cacao and banana plants. The team made a stop-over at Sinobong public high school that was established with the help of UP Mindanao volunteers. In Barangay Talle, the team held consultations with residents who farm inside the reservation. Finally, the team visited Compostela Valley State College and held discussions with college president Dr. Christie Jean Ganiera and her key staff for possible collaborations. The team also discovered alumni who worked in the provincial capitol and in the state college.

UP Mindanao's Office of Student Affairs organized an Earthquake and Fire Stafety Orientation and Drill on 30 September 2019, in  line with the Davao City local government unit's thrust to develop a disaster-resilient community. Barangay Matina DRRM Consultant Primo V. Cruz discussed  earthquake safety and Senior Fire Officer Rodel Estilloso talked on fire safety in the plenary sessions. At 2:20 PM an earthquake drill was carried out that saw UP Mindanao constituents practice the duck-cover-and-hold routine and orderly evacuation to open ground.

London-based magazine Times Higher Education (THE) has placed the University of the Philippines in the world’s top 500 universities and fourth in the ASEAN region, according to the 2020 THE World University Rankings.The national university is listed in the 401-500 group of 1,396 ranked research universities.

For 2020, UP has been ranked 159th in citations which places it in the top 11 percent of prestigious universities that have “influence in spreading new knowledge and ideas.” Its score in citations went up from last year’s 69.1 to 86.9. As indicator of research influence, 'citations' refers to the average number of times a university’s published work is cited by scholars globally. This year, THE's bibliometric data supplier Elsevier examined 77.4 million citations to 12.8 million journal articles, article reviews, conference proceedings, books and book chapters published over five years. The data include more than 23,400 academic journals indexed by Elsevier’s Scopus database and all indexed publications between 2014 and 2018. Citations to these publications made in the six years from 2014 to 2019 are also collected.

UP also scored better in teaching (from 21.7 to 24.1), research (from 16.4 to 17.2) and industry income (from 35.8 to 39.4). A global academic reputation survey partly determines the scores for teaching and research.UP, however, slipped in international outlook, with its score down from 39.5 to 37.9. International outlook considers the number of international students and staff as well as international collaboration.Only two universities from the Philippines appeared in the latest table. UP is still the leading university in the country. 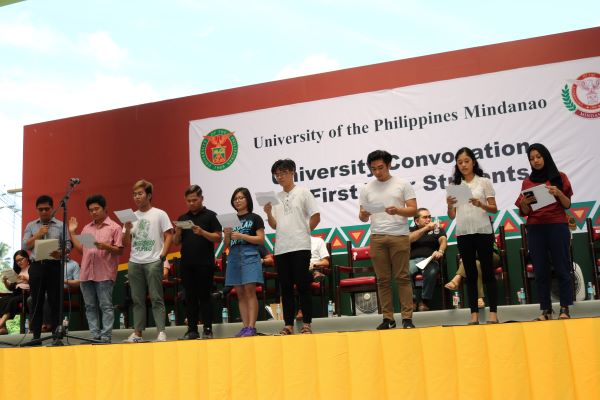 The University of the Philippines (UP) Mindanao opened the first semester of Academic Year 2019-2020 with 111 graduate and 727 undergraduate students. University officials, faculty members and staff welcomed the 340 First Year students at the University Convocation for First-Year Students on 5 August 2019. Chancellor Digal also led the swearing of new University Student Council officers (in photo, right).

In a highlight on 7 August, the School of Management reviewed the agribusiness research and development in Mindanao at the “Agribusiness Economics and Management Forum: Works and Achievements of Prof. Sylvia B. Concepcion” held in Lorenzo Hall. Colleagues recalled the research projects from the vegetable supply chain started by Prof. Concepcion that had grown to include value chain studies in tuna, corn, palay, kalamansi, mango, and Cavendish bananas, and had broadened to encompass aspects of gender, environment, poverty, jobs creation, and capability-building of farmers and researchers. In her response, Prof. Concepcion expressed her satisfaction at seeing people continuing what she started and acknowledged the Vegetable Industry Council of Southern Mindanao for having undertaken the development journey alongside UP Mindanao.

In a welcome surprise from students, BA Communication and Media Arts sophomores Catherine Joy Catulong and Jasmine Nicolle Jain won a Special Jury Prize in the 2019 Cinemalaya Campus Short Shorts Competition for their short film "Praktis" in ceremonies held on 13 August. Films by students from the Bicol Region, Iloilo City, and Davao City were showcased in the competition.

On 9 August, the Center for the Advancement of Research and engagement in Mindanao organized the In-House Research Review for selected research projects to prepare these for publication, possible patentable technologies, and contributions to sustainable development goals for Mindanao. The research presentations on smallholder Cavendish banana farmers and livelihood in conflict-vulnerable areas, map-making for flood effects and risks in southeastern Mindanao, and marine fishes in Davao and Sulu were among the externally-funded projects presented. The smallholder goat value chains, the pollination ecology of cultivated durian (Durio zibethinus Murr.), the molecular characterization of bats, and the environmental compliance of the UP Mindanao campus were among the internally-funded projects. In addition, researches on the nitrate/nitrite levels in longgonisa, the potential antioxidant and anticancer food components from various plant sources, and the probiotic potential of lactic acid bacteria isolates from the UP Mindanao culture collection completed the presentations that were heard by a panel of experts from partner universities.  Assistant professors Joseph Acosta [map-making] and Fritzie Camino [pollination ecology] were named best presenters for the external- and internal-funded research, respectively.

On 15 August, Prof. Joel Cuello, a world-renowned professor of agricultural bio-systems engineering of the University of Arizona, delivered a landmark public lecture on the topic "Strengthening the Innovation Ecosystem of the Philippines Toward Inclusive National Development" as part of the UP World Experts Lecture Series. In his talk, Prof. Cuello envisioned a stronger and deeper tripartite partnership between academe, government, and industry in the Philippines in order to create a science and technology innovation ecosystem that can drive the economy forward, similar to Silicon Valley in the United States.

In closing, Prof. Cuello showed photos of his projects such as bio-system farms inside buildings and his academic institution, “This is my university, the University of Arizona in Tucson. I hope you can visit and it is my sincere hope is that we’ll have long term relationship with UP Mindanao,” he concluded.