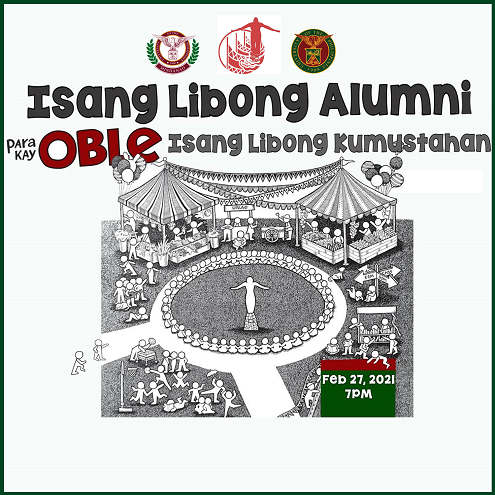 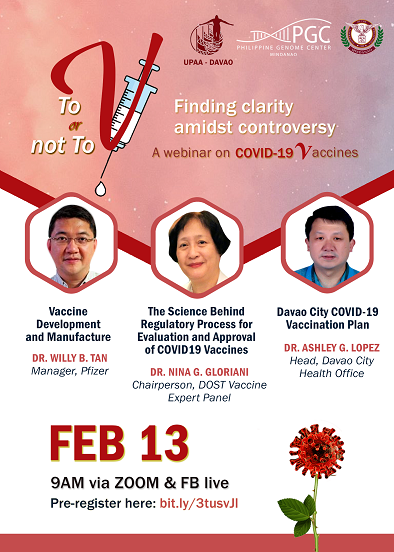 “To V or Not To V,” a free internet forum and webinar on COVID-19 vaccines, will be held on 13 February 2021, at 9:00 a.m. to 11:00 a.m. via Zoom. Interested parties may register at https://bit.ly/3tusvJI. The webinar will also be live-streamed on the Facebook pages of the organizers, the UP Alumni Association (UPAA) Davao, the University of the Philippines (UP) Mindanao, and the Philippine Genome Center (PGC) Mindanao.

The webinar is a contribution to the ongoing discussion whether to vaccinate or not to vaccinate oneself against the COVID-19 disease, a topic that is presently being debated worldwide, more so in the Philippines with its recent experience on vaccines. Through the webinar, the UP community hopes to help in the Filipino’s decision-making process. “There are many perceptions about the issue and it’s best to hear from the experts,” said UPAA-Davao director Atty. Glenn Cedeño-Sorila. “Participants to the webinar get a chance to type in their questions in the Zoom chat box which will then be conveyed for the speakers to answer,” said PGC Mindanao director and UP Mindanao faculty member Prof. Lyre Anni Murao.

Dr. Willy Tan, Manager for Global Product Development – GCMC Vaccines of Pfizer Inc., will talk on “Vaccine Development and Manufacture.” The topic on “The Science Behind Regulatory Process for Evaluation and Approval of COVID-19 Vaccines” will be discussed by Dr. Nina Gloriani, Head of the Department of Science and Technology’s (DOST) Vaccine Expert Panel and member of the World Health Organization (WHO) Philippines Scientific Steering Committee for COVID 19 Solidarity Vaccines Trials. Finally, Davao City Health Officer Dr. Ashley Lopez will talk on the “Davao City COVID-19 Vaccination Plan.” Welcome Remarks will be given by Cabinet Secretary Atty. Karlo Nograles, who is also co-chairperson of the Inter-Agency Task Force for the Management of Emerging Infectious Diseases. In his opening remarks, Atty. Nograles will also give an overview of the national government’s vaccination roadmap. Dr. Celia C. Castillo, a doctor of internal medicine, will be the moderator for the forum. Closing Remarks will be delivered by UP Mindanao Chancellor Larry Digal. Atty. Cedeño-Sorila will serve as the event host. The webinar is a public offering for the 26th anniversary of UP Mindanao.

[UPDATE] Dr. Teodoro J. Herbosa, Medical Adviser/Consultant to the National Task Force against COVID-19 and UP executive vice president, will represent Sec. Carlito Galvez in the webinar to talk on the "National COVID-19 Vaccination Roadmap."

University of the Philippines, Mindanao is celebrating its 26th anniversary this month of February, and so I am congratulating and truly thankful to the UP Alumni Association Davao and the Philippine Genome Center Mindanao, for successfully organizing this online forum and webinar on the COVID-19 vaccination issue in line with our anniversary celebration. I need to specifically mention UPAA Davao director Attorney Marie Glenn Sorila, UP alumna Dr. Celia Castillo, and Philippine Genome Center Mindanao director  Professor Lyre Murao. This activity would not have been possible without your active support. I also acknowledge the invaluable inputs and insights provided by Cabinet Secretary, Attorney Karlo Alexei Nograles, chairperson of the Interagency Task Force, Dr. Willy Tan of Pfizer, Dr. Nina Gloriani, head of the DOST Vaccine Expert Panel, and member of the WHO Philippines COVID-19 Steering Committee, and Dr. Ashley Lopez, our Davao City Health Officer.
I hope that through this webinar we have contributed to efforts in increasing awareness of the government’s COVID-19 vaccination program and enlightening the public to decide as to whether to get vaccinated or not. UP Mindanao, for its 26th-anniversary celebration, is transcending towards a resilient recovery in the new normal. Since 2019, many of our alumni know that UP Mindanao has been aggressively gearing towards expanding its programs to make a dent in Mindanao’s development. They know because this expansion program was presented in the Regional Alumni Institute assembly that year. A major part of this expansion is the establishment of three colleges and 16 new programs. One of the colleges is the College of Medicine. With the onslaught of the pandemic, we configured our priorities and this college was even magnified to become part of a bigger initial initiative, which we call the Mindanao Health Initiative. This initiative includes two other components, a Davao City-UP Hospital, which will be established on our campus, which will become also the teaching hospital of the College of Medicine, and the Mindanao Center for Research and Innovation for One Health. The latter builds on the network developed by PGC Mindanao in assisting various COVID-19 testing laboratories in Mindanao and their research work on the pandemic and as an accredited testing Center for African Swine Fever. So UP Mindanao is well-positioned to contribute significantly in a resilient recovery. Daghang salamat sa tanan!

The University of the Philippines (UP) Mindanao administration has seen posts published on social media that accuse UP Mindanao and one of its alumni of collaboration in misleading the youth into joining terrorist groups.

The UP Mindanao strongly repudiates the red-tagging of the institution, its student publication, and its alumnus for the malicious accusation and labelling on subversive involvement in the communist ideology.

Moreover, UP Mindanao neither promotes nor condones any recruitment activity by the outlawed communist party.

We request the public to refrain from spreading disinformation and false allegations that circulate online. The University administration warns such groups that publishing accusations without acceptable evidence or proof is a crime under multiple laws.

As an institution of higher learning, repository and producer of knowledge, and builder of communities, we firmly retain independence and autonomy against those perceived to be enemies of the state.

While we aim to protect one’s right to life, liberty and security from being associated with any communist front organization, this blanket act of red-tagging endangers our students, faculty and whole academic community as it maligns and imperils people for the lawful exercise of their freedom of expression.

In the prevailing context where some of the members of the UP community become the targets of harassment and threats, we in UP Mindanao stand to end the vicious practice of red-tagging.

We urge pertinent government agencies to address legitimate criticism of its policies, and take concrete steps to ensure the safety and protection of individuals from these unlawful acts of red-baiting and other similar acts.

I am acknowledging receipt of your letter of 15 January 2021 informing me of the unilateral abrogation by your office of the agreement signed on 30 June 1989 by then DND Secretary Fidel V. Ramos and then UP President Jose V. Abueva—an agreement that, you will recall, established certain norms and protocols governing relations between the University and military and police forces.

I must express our grave concern over this abrogation, as it is totally unnecessary and unwarranted, and may result in worsening rather than improving relations between our institutions, and detract from our common desire for peace, justice, and freedom in our society.

That agreement was forged with the formalities that attend the execution of agreements, imbued with the highest sense of fidelity of the parties. It was grounded in an atmosphere of mutual respect, which we were able to maintain for 30 years through the observance in good faith of its provisions. With few exceptions, protocols were observed and any problems or misunderstandings were amicably and reasonably resolved. The agreement never stood in the way of police and security forces conducting lawful operations within our campuses. Entry was always given when necessary to law enforcers within their mandate.

We regret that the agreement was abrogated unilaterally, without the prior consultation that would have addressed the concerns you raised in your letter. Instead of instilling confidence in our police and military, your decision can only sow more confusion and mistrust, given that you have not specified what it is that you exactly aim to do or put in place in lieu of the protections and courtesies afforded by the agreement.

Perhaps this will be a good opportunity to emphasize that we sought and secured that agreement not to evade or weaken the law, but to protect the climate of academic freedom—guaranteed by the Constitution—that makes intellectual inquiry and human and social advancement possible. We want to maintain UP as a safe haven for all beliefs and forms of democratic expression. In that, all the signatories to the agreement believed and bound themselves to uphold.

Our University community does not and cannot fear the fair and speedy enforcement of the law, and we value and appreciate the contributions of our uniformed services to our safety and security. We do not condone sedition, armed insurrection, or the use of violence for political ends.

At the same time, especially given our experience of martial law, we must reject any form or semblance of militarization on our campuses, which will have a chilling effect deleterious to academic freedom. This abrogation endangers the goodwill necessary for both of us to achieve our mission as responsible members of the same national family.

Our police and military authorities should have no fear of academic freedom. Indeed UP has bred rebels and nonconformists—as well as it has bred presidents, senators, congressmen, and business, civic, and even military leaders. All the world’s great universities have produced the same range of thinkers and doers. By and large, intellectual and political dissidents in UP have always been in the minority, but it is a critical minority that has historically been vital to the maintenance of a healthy democracy.

Left in peace, UP will continue to be a major contributor to the country’s development and to its national leadership in all fields. Its most recent international ranking—65th among the 489 universities in Asia evaluated by the Times Higher Education Asia University Rankings—attests to the high quality of its achievements.

That performance, Mr. Secretary, is the result of its exercise of academic freedom—the freedom to think, to probe, to question, to find and propose better solutions.

May I urge you, therefore, to reconsider and revoke your abrogation, and request further that we meet to discuss your concerns in the shared spirit of peace, justice, and the pursuit of excellence.