Members of the University of the Philippines Alumni Association-Davao Chapter (UPAA-Davao) are called to choose 14 directors in elections to be held on 22 February 2020 (Saturday), from 9:00 a.m. to 1:00 p.m., at Farmfix, Bacaca Road, Davao City (across FS Dizon Elementary School).
“The Election Committee, chaired by outgoing UPAA-Davao president Joel Laserna, has been constituted and is now accepting nominations for 14 board seats,” said the bulletin issued by the committee.
Eligible to be nominated and to vote are bona fide members of UPAA-Davao, who may also nominate fellow-members. Members may cast their votes in person or through a proxy. Alumni may apply for membership on election day, by paying the membership fee.
The nomination and proxy forms are available at the UP Mindanao Foundation, Inc., with address at 2/F Vega-Quitain Building, F. Iñigo (formerly Anda) Street, Davao City. Members may also request for the forms to be sent by email from Ms. Doromal at the email address , or through mobile phone no. 0906-298-1067.
Completed nomination forms, with the signature of the nominee, must be submitted to the UPMFI office or through the email by 19 February 2020, 5:00 p.m. Signed proxy forms must be submitted in the same manner by 20 February 2020, 5:00 p.m. The designated proxies must be present to vote on 22 February 2020.
UPAA-Davao was founded in 1949 and was instrumental in creating UP Mindanao. It has been awarded as Outstanding Chapter twice and counts alumni from all eight UP constituent universities among its members.
### 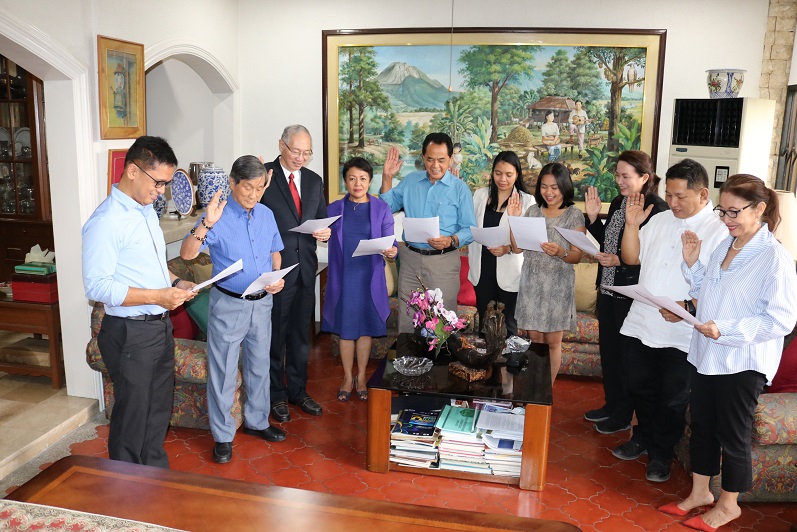 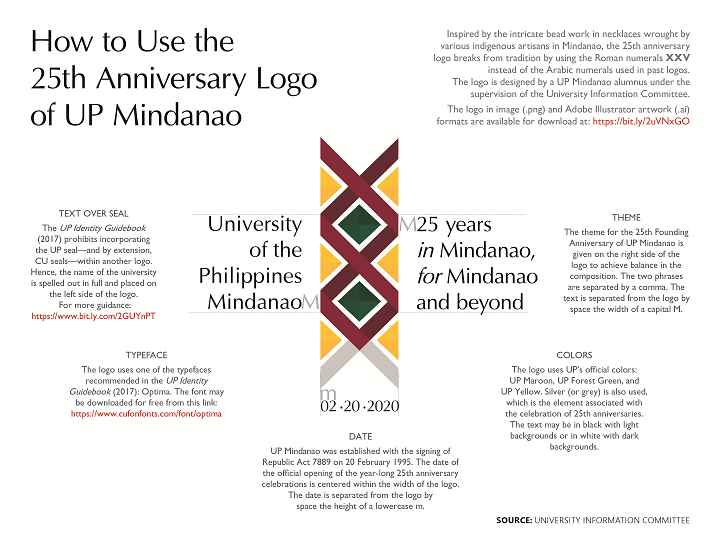 HOW TO USE THE 25TH ANNIVERSARY LOGO OF UP MINDANAO

The logo for the 25th Founding Anniversary was designed in line with the UP Visual Identity Guidebook (2017), which can be accessed here: https://bit.ly/2GUYnPT

The anniversary logo in image (.png) and Adobe Illustrator artwork (.ai) formats, as well as templates for the new letterhead, are available online. Link: https://bit.ly/2uVNxGO

The typeface Optima used with the logo may be downloaded for free here: https://www.cufonfonts.com/font/optima

January 2020 is the start of the Second Semester of Academic Year 2019-2020. The schedule for General Registration and start of classes are as follows:

24 January - Philippine Genome Center-Mindanao Satellite Facility holds "Brainstorming" with participants from industry and universities and resource persons from UP Manila and other institutions.

30 January - Concert, "25 songs for 25 years" by Alagad ni Oble and Early Morning bands; to be held at the Administration Building, UP Mindanao, Mintal, Davao City

UP Mindanao will celebrate its 25th anniversary in 2020. A series of public offerings will be delivered throughout the year, both academic and recreational.

"Alagad in Oble" rock band will hold a reunion concert on 30 January 2020 as an offering for the 25th anniversary of University of the Philippines (UP) Mindanao.   The concert entitled "25 Songs for 25 Years" will be held at the Administration Building, UP Mindanao, Mintal, Davao City. The public is invited and admission is free of charge. Alagad ni Oble is composed of UP Mindanao alumni Roosevelt Itum (BS Biology), Ian Cayunda (BS Biology), Arthur Gonzales (BA Economics), Milos Dagohoy (BS Food Technology), and Wardy Puyod (BA Social Science).
The band was conceived during the members' student days in UP Mindanao and has continued to exist and perform seasonally alongside the professional growth of the band members.
The band has also recorded a rock version of the "UP Naming Mahal" which is among its widely heard songs.

The anniversary kick-off is on 20 February 2020 with a motorcade in downtown Davao City to the campus in Mintal, Davao City. Celebrations will be held in the Administration Building throughout the day till evening.

15 January - Chancellor Digal initiates the process for the Search for Dean of College of Humanities & Social Sciences by announcing a Call for Nominations to the Search Committee on 15 January 2020. The Committee willbe composed of one representative each from the Senior Faculty, Junior Faculty, REPS, Administrative Staff, and Students. Nominations to the Committee should be submitted in a sealed envelope to the Office of the Chancellor on or before 24 January 2020.

Senior Lecturer Anne Shangrila Fuentes of the Department of Social Sciences and Assistant Professor Glory Dee Romo of the School of Management are among the ACIAR scholars featured in this video. View the video here: http://bit.ly/382FRkv

Researchers Karen Joyce Cayamanda, Mitchiko Lopez, and Raymundo Pavo were given awards for “Best Presentation” for their respective research presentations in the 5th Asia Future Conference held for the first time in the Philippines on 10-12 January 2020 with UP Los Baños as the host institution. Assistant Professor Cayamanda was awarded for “Risk Communication Management towards a modified Social Amplification of Risk Framework (SARF) and theory,” part of a study on flood-vulnerable settlements in Davao City, that was presented in the session "Environment: Risk Management." University Researcher Lopez was  recognized for “Gender attribution in cocoa value chain in Davao City: A pathway to minimizing risks towards a more pro-poor value chain analysis” that was presented in the session "Shared Growth: Farming and Industrial Development." Assistant Professor Pavo was awarded for “Local Capacity Development Framework for Roxas Night Market, Davao City, Philippines” that was presented in the session "Shared Growth: Economic Case Studies."

Sun  Star Davao newspaper published a news article by reporter Ralph Lawrence Llemit on 12 December 2019 focusing on Davao City councilor Antoinette Principe-Castrodes's privilege speech to the Davao City council proposing a resolution to support UP Mindanao's expansion plan as presented in the recent UP Regional Alumni Institute (RAI). "University of the Philippines-Mindanao (UP-Min) will need P12-billion for its planned expansion and modernization. Councilor Antoinette Principe-Castrodes revealed during her privilege speech on Tuesday, December 10, that UP-Min needs upgrading and modernization - from infrastructure, facilities, and its teaching personnel," said the opening sentence of the article.
"The councilor filed a resolution supporting UP-Min’s five-year development and expansion plan," the article continued. "'I am endorsing UP RAI’s resolution no.1 and, in the same manner, appealing to this august body to support the resolution requesting President Rodrigo Duterte to endorse to Congress for priority legislation (UP RAI’s) resolution no. 1 which calls for Congress to pass a special legislation to support UP Mindanao’s development plan,' Principe-Castrodes said."
The article quotes the councilor saying that the needed budget will be coming from the national budget; that UP Mindanao has produced 3,000 graduates who now occupy key positions in government, schools, business, and civil society organizations; that UP Mindanao will celebrate its 25th anniversary in 2020 and that "she hopes that the university would become a 'more robust partner in the attainment of inclusive and sustainable development in Mindanao and the country”.
The article enumerated the other RAI resolutions: the resolution to expand UP-Min’s academic program offerings; a resolution to support the implementation of the Mindanao Sports Development Program and the completion of the Davao City-UP Sports Complex; a resolution for the establishment of the UP-Min botanical garden to support the agro-eco-cultural tourism in Davao Region; a resolution to strengthen he research, development and engagement of UP-Min on sustainable agri and biosystems; and a resolution to establish knowledge, innovation science and technology park in UP-Min campus to accelerate innovation and investment; a resolution for the establishment of a UP College of Medicine in Davao City in partnership with UP Manila to respond to the medical and health needs of the island region; and a resolution to respond to Mindanao’s graduate program needs through joint programs of UP campuses and support of the Commission on Higher Education and the Department of Science and Technology.
[Update: The Office of the Sangguniang Panlungsod issued a "Certificate of Urgency," that stated, "I hereby certify the urgency and necessity of the passage of the following: 'A resolution supporting UP Mindanao's five-year development and expansion plan and urging President Rodrigo Duterte to endorse UP RAI's resolution no. 1 to Congress for priority legislation.' To be passed under Suspended Rules of the Regular Session of the 19th Council on 10 December 2019. For consideration. Hon. J. Melchor B. Quitain, Jr. Floor Leader"]
See the Sun Star article here: http://bit.ly/2smrHuV